Today I went on an Urban Sketchcrawl in Manchester city centre. As you may remember I tried to organise a series of walks with a sketchbook eighteen months ago, one of the wettest summers in recent memory. I’m not sure what I expected but with my Drawn Out walks we tended to stick together and the social aspect as we chatted while we drew was an important part. I was certainly looking forward to meeting other artists from the Manchester and Salford area.

After an initial mix-up with another group who were meeting in the same place and at the same time for a guided walk, I met the Manchester Urban Sketching Group at Victoria Station at 11 am. We were given a card with the ‘itinerary’ on it – a pub for lunch at 1 pm, a second intermediate meeting point at 2 pm and a final ‘show and tell’ in a refreshment establishment at 4 pm. Nevertheless I was surprised that within a few yards the large group had dwindled to a handful as people seemed to head in different directions.

Quite close to Manchester’s Victoria Station, there is a grass area between the National Football Museum (formerly Urbis) and Cheethams  School of Music and several people, including myself, started drawing here.

I drew Urbis, as I still think of it, in charcoal.

Here is a photo of the ‘original’.

I moved my stool and sketched the centre of the Cheetham’s building.

When I’d finished, I turned round and found the small number that had been there had all disappeared. Unfortunately I didn’t get to the pub until 1.15 and couldn’t find anyone who looked like a sketcher. I found out later that, as it was crowded, they’d gone to another pub round the corner.

By this point it was raining so I sort refuge in the Royal Exchange. This is an ‘in-the-round’ theatre which looks a bit like a Lunar Excursion Module has landed in a vast room. I sat in a corner of the Great Hall Cafe: 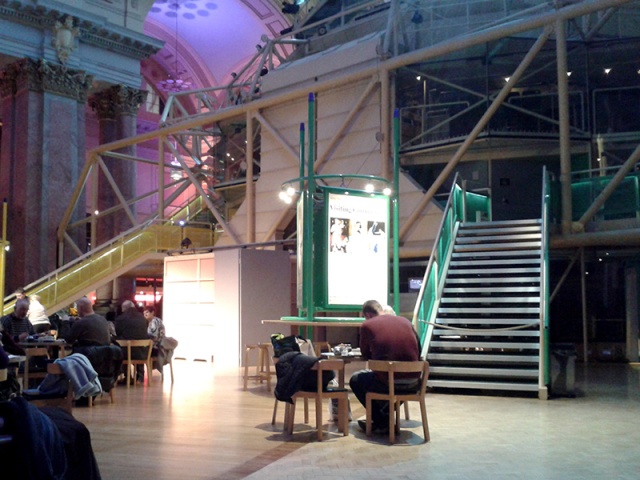 As I was warm and dry in the Royal Exchange I didn’t bother with the second intermediate meeting point (which was back at Urbis) so trolled down to Spiningfields, a fairly recent development as I wanted the challenge of the Filing Cabinet as the Manchester Civil Justice Centre is affectionately known. The different floors stick out to different degrees so they look like the open drawers of a filing cabinet. The perspective is the challenge. As you can see, I forgot my can of spray fixer for the charcoal!

I did try another sketch of a footbridge over the River Irwell but a combination of blustery wind and cold hands means I’m not bothering uploading the result. I meandered towards the final meeting point where I met the first sketchers I had seen for over four hours. There was some chatting but I felt too cold to join in much.

Yes, the Sketchcrawl had got me into Manchester to do some drawing which I wouldn’t have done at home, but I could easily have come any other day to have sketched on my own. Perhaps, I was expecting more from an organised event. Perhaps if I’d not been late at the pub, or had decided to leave the warmth of the Royal Exchange I’d have taken part in more of the social side of the day. Either way I’m ambivalent about attending future ones.

Here are some shots of the ‘show and tell’ at Kro in Piccadilly Gardens:

A sketch done at the pub at lunchtime

16 Responses to Urban Sketching In Manchester