Posted on December 9, 2013 by notes to the milkman

I now know what the Doctor’s companions feel like when they go into the TARDIS for the first time! This weekend has been Open Studios at PS Mirabel in Manchester (only just – a few yards away over the bridge and it would be in Salford!) near Victoria Station. I’ve been past the small insignificant door before so I only expected a few studios with half a dozen artists. Wrong! It was a warren with thirty one artists showing their work. Unfortunately I can’t cover every one of those thirty, but I’ll try to give you a flavour of the work there.

It was Jonathan Hughes who invited me so I’ll start with one of his pieces. Jonathan often works with ‘extra large’ charcoal. This piece is called The 2 of us. Spotlights are very atmospheric but they are a soandso when it comes to photography. 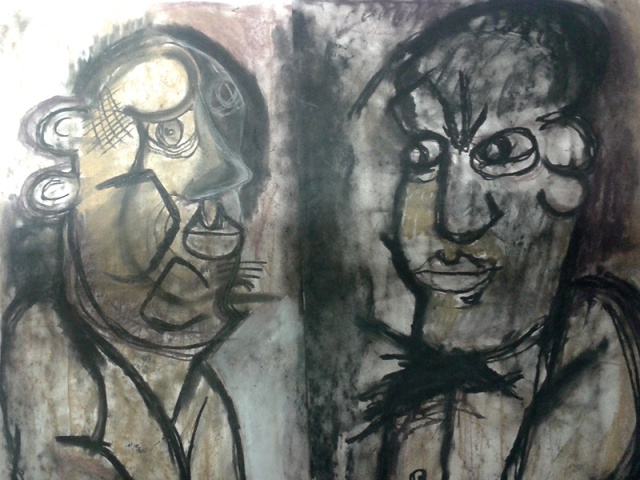 Next to Jonathan was Sean Caherty whose work reminded of a cross between that of Jason Simpson, who uses gloss paint, complete with wrinkles, and Adrian Pritchard, who uses gravity in his work.

In the next studio was Rachel Wrigley who had some interesting 3D work. But they were not sculptures. One technique uses papier mache to take casts of the surface of objects, often furniture. She says it takes weeks for the paper to dry properly. (I can just imagine what the Management would have to say if I tried that!) The other involves scoring and folding pictures, often from magazines and often, again, furniture.

The final artist in this section of Mirabel was Yvonne Koo who comes from Hong Kong. While she had done some interesting landscapes, the piece I really liked was one which revealed her eastern origins:

In another part was a large studio shared by four artists. I’d seen Naomi Lethbridge’s work at the Manchester Contemporary as it was on the next stand to Hot Bed Press. One thing she does is to draw cut out and fold 3D objects and then photocopies them onto card. For example she had a whole squadron of Star Wars spaceships. She also sketches in ink. She gave me a postcard of a waffle.

I know the work of Jenny Core from neo:artists and from Facebook. I’m not exactly sure of her drawing technique. Must quiz her one day! (Sorry about the shadows caused by strip lights!)

In a studio nearby was a very large painting by Howard Fisher. It was simple but I loved it: 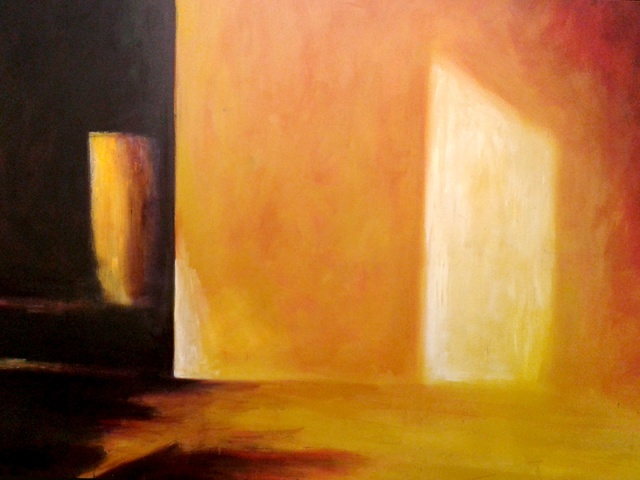 Not all the artists were potential YBAs. Christine Lawley, like myself, is a retiree who is now able to devote her time to her art. Last summer she went plein air with her pastels. Plein air? Pastels? Pretty countryside? No. The work was the area immediately around the studio.

One artist whose work I like is Laura Jane Blake. I’ve seen (and played with) her large installation pieces at neo:gallery in Bolton. While she had  a portfolio of her work she didn’t really have anything for me to photograph. Downstairs, outside, was an installation. I’m not sure if Laura Jane was responsible for the Newton’s Cradle made with sledge hammers! I got frowned at by someone on a mobile phone when I started playing with it.

David Hancock had some large watercolour pieces with Japanese influences. This one was called Jo as Yuki Cross.

The penultimate artist I want to mention is Aziza Mills who had a lot of life studies. This was just about the only more detailed ‘finished’ piece: 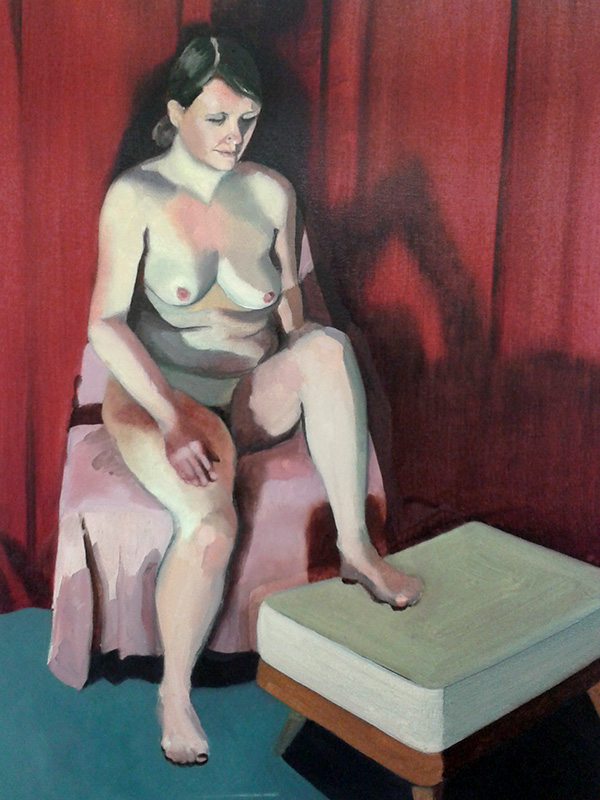 Aziza shares a studio with my favourite artist of the evening Katarzyna Jablonska who does the most amazing drawings. Here are two of them to finish off: