No Photography At The Whitworth

The old chestnut of photography in art galleries reared its head again today as I went to check out the latest exhibitions at the Whitworth Art Gallery in Manchester. I was there killing time as I had arrived to hand in my masterpiece at the Open Contemporary art exhibition at Stockport Art Gallery three hours early. I’ve now checked the website and it does give the handing-in times in small print at the bottom of one of the pages. They could certainly have been clearer. Art Galleries only open in the afternoon is something new to me.

However, my screenprint ‘I Can’t Afford Campbells By Austerity Warhol’ is now awaiting judgement in Stockport. For the benefit of our colonial cousins, it is a tin of soup from the ‘value’ (i.e. dirt cheap) range at Morrisons, one of the British supermarkets. Tracie, a friend, described the print as ‘ironic and iconic’. (As usual, apologies for the glass reflections):

Meanwhile, back at the Whitworth, several exhibitions opened simultaneously last week as their Summer Season. This coincided with the start of the Manchester International Festival, one of the highlights being Nikhil Chopra’s 65 hour performance Coal on Cotton. The finished product was hanging outside the gallery while his working materials and props were inside the entrance. (The link has a short video about the performance.)

In one gallery, there was Revolutionary Light which featured work by William Blake, JMW Turner and Anish Kapoor. OK, light was an important feature of each artist’s work, but I couldn’t really see why they had been brought together. I like Kapoor’s sculptures but this was the first time I had seen any of his 2D work. It was a suite of aquatint etchings called Blackness from her Womb (2001). As the blurb next to the prints said, many of them were reminiscent of his void sculptures. 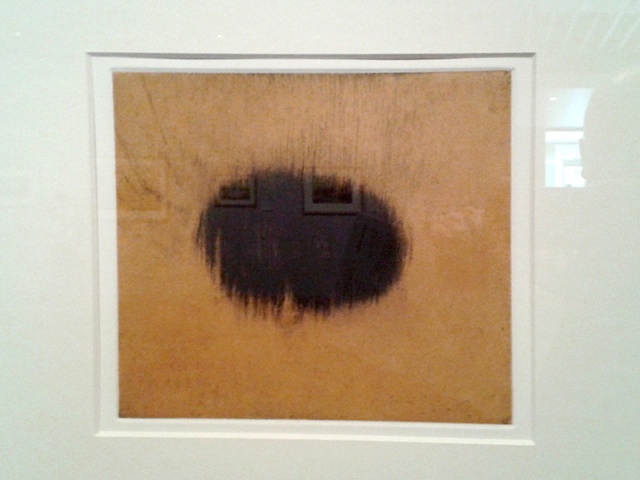 In another gallery was the work of Pavel Bu(with an umlaut)chler who “wrote his diaries on twelve pages – all of January on one page, over and over again for all thirty-one days, and repeated this process for every month of the year … these self-obliterated diaries tell us nothing through writing, but by becoming drawings make us notice the difference between meaning as word and meaning as image.” Now Magritte did a lot of meaningful work on the difference between an object, the image of the object and the written name of the object. However, the work on show here was a load of dingo’s kidneys, as Douglas Adams might have said.

There were other new exhibitions but the main one I wanted to see was Continental Drift as is has “stellar works from the Whitworth’s collection made by leading European artists, and British artists with links to the Continent.” We’re talking prints and paintings from the likes of Durer, Rembrandt and Picasso.

It was after taking a shot of the blurb next to Picasso’s etching A Frugal Meal that I was told by a young lady “No photography allowed.” Now I’ve posted before about photography in galleries and there seems to be certain reasons for saying ‘no’. Firstly, it can produce congestion. In the Italian Renaissance galleries in the Louvre (Moaning Lizzie and so forth), there is no photography allowed. It is heaving and the thought of people posing in front of paintings makes me shudder. However in other areas such as the Dutch Golden Age galleries, there are fewer people and no problem with photography.

The second reason often given is that works are on loan and it is a condition of the loan that there is no photography. I was able to photograph Vermeer’s Lacemaker ‘at home’ in the Louvre but not in the Fitzwilliam in Cambridge when it was part of an exhibition called Vermeer’s Women.

A third reason relates to copyright. Believe it or not, (I’m tempted to do a scan of the card ‘cos I wouldn’t believe it!) the back of the postcard of a van Gogh watercolour/inkwash of Hayricks is marked as copyright of the artist even though he died in 1890 and I think copyright expires 70 years after the death of the originator.

The fourth reason is to do with sales of postcards in the gift shop. This is fine if you can guarantee there is a card of the work you like. I counted about three dozen cards – far less than the number of works in the Continental Drift exhibition, let alone the rest of the place. There is also an assumption here that anyone photographing a work will not buy a card. I bought four cards – two of which I had already photographed before being told to stop.

The final reason is that they don’t want poor quality copies circulating. The newly reopened Rijksmuseum have combated this by making high resolution images available online.

So let’s examine those reasons in terms of today’s visit to the Whiteworth and the Continental Drift exhibition: a) Congestion. Most of the time I was the only one in the gallery. b) Loan condition. They are all the Whitworth’s own works. c) Copyright. Anyone who can mark a postcard of a work by van Gogh as copyright of the artist needs to read up on copyright law. d) The Gift Shop. I bought four postcards and would have bought more if copies of the works I liked had been available. e) Poor Quality Copies. I want to illustrate my blog not make my fortune selling t-shirts of Picasso’s Poverty.

Anyway, in the Continental Drift exhibition, there is this interesting woodcut by Christiane Baumgartner:

As you can see from this close up, Christiane has a great technique to achieve the overall effect:

You will no doubt now want to visit the Whitworth to see this excellent work yourself.

7 Responses to No Photography At The Whitworth