This morning’s Daily Telegraph dedicated no less than thirty pages to the death of Mrs Milk Snatcher. (I saw a photo on Facebook yesterday of Thatcher with Jimmy Savile. One comment was ‘A sick bastard who preyed on the weak and vulnerable – and next to her is Jimmy Savile’.) While I may not be joining any former miners in having a street party, but after her destruction of entire communities and the introduction of the Me! Me! Me! culture, I’m certainly not shedding any tears either.

However, there was one article I did read in today’s paper. This was a review by Richard Dorment of the reopening of the Rijksmuseum in Amsterdam. Until I read this article I hadn’t understood why it had taken ten years to restore the Rijksmuseum. If they had demolished it and rebuilt it, I’m sure it wouldn’t have taken as long.

“In 2003 this dim sad labyrinth of a building closed for renovation. What happened next became an international scandal. Poor planning, a botched tendering process, the bankruptcy of contractors, the loss of a director, the discovery of asbestos, and a viciously effective campaign by Amsterdam’s cycling lobby to protect their inalienable right to pedal through the roadway that divided the building meant that a project intended to take three years to complete took ten, and cost an incredible £318 million pounds.”

He then went on:

“A good part of that money was used to placate the bicycling lobby. The Spanish architectural practice of Cruz y Ortis were forced to dig below sea level to create a vast underground atrium – simply to unify the two sides of the building at that level.

“But I suppose all that will be forgotten on April 13, when Queen Beatrix reopens the renovated Rijksmuseum, her last official engagement before abdication. For the selfish cyclists may have done their country a big favour after all. As you descend stone steps from the entrance to the light- flooded new entrance hall, the monumental scale of a space housing the ticket and information desk, cloakrooms, shop and restaurant sends a shiver down your spine. With hindsight, it is obvious that the former entrance was so dark and narrow that no amount of tinkering with the old building would have worked. Thanks to our two wheeled friends, the Rijksmuseum got what it needed — an audacious rethink, a bottom-to-top clear-out that signals a new era in the museum’s history.” 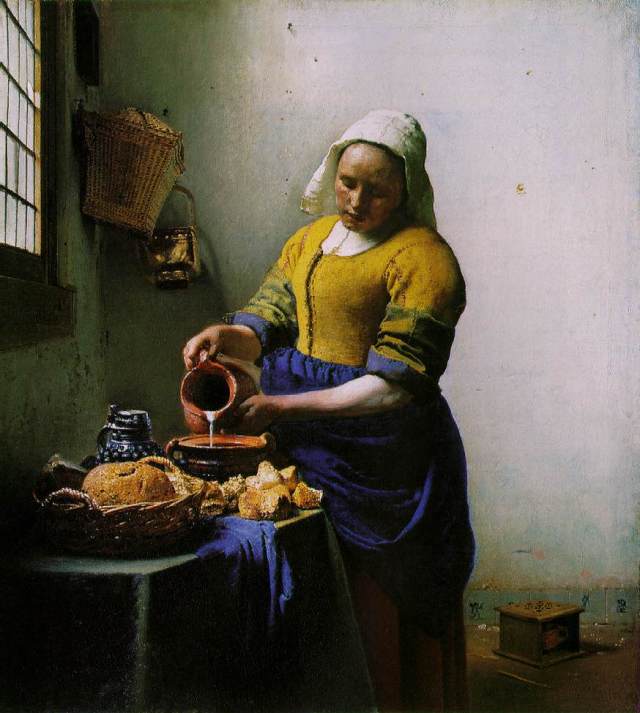 Dorment stated that “at the heart of any visit to the Rijksmuseum is the huge Gallery of Honour on the second floor, where the best of the Dutch Golden Age paintings hang. The enormous gallery was consciously designed to feel like a church, with a procession of side chapels running down the nave. Though we stop to look at famous pictures by Vermeer and de Hooch, Frans Hals and van Ruisdael, our eye is always drawn forward to the museum’s supreme treasure, Rembrandt’s Night Watch. I almost felt I should genuflect.

“I realise that masterpieces like Vermeer’s The Milk Maid are hung singly in a straight line all the way down the nave both to emphasise their importance and to create space between them at the height of the summer tourist season, but aesthetically it is a mistake. Because most of these works are fairly small in scale, they’d look even more beautiful if they could be anchored in place by a double or even triple hang. These issues arise in any newly installed gallery, so take them as quibbles.”

I have to admit that every time I see The Milk Maid I always smile to myself as I remember a card I saw of it several years ago. The caption on it had two fictitious newspaper quotes: “No words can express the beauty of the earthenware.” The Times. “Nice jugs!” The Sun.

However, I have to disagree with one of Dorment’s complaints:

“And though I hate to sound curmudgeonly, would it be possible to do something about the truly revolting state of Museum Square behind between the Rijksmuseum and the Concertgebouw? Ugly concession stands, horrible signage, temporary loos, concrete barriers.”

I can personally vouch for the fact that one of those ‘ugly concession stands’ does superb Belgian waffles!