I blame Woman Walking Slowly for my current interest in collage. Yesterday’s Daily Telegraph had an article about Kurt Schwitters, who has an exhibition coming up at Tate Britain starting on January 30th. The item was illustrated with one of his collages, “En Morn” from 1947.

The article, about Schwitters’ life rather than the exhibition itself, was quite long and, as usual, I can’t find an electrical version on the interweb thingy. I’m only going to quote parts:

“On August 15 1946, the German artist Kurt Schwitters sold two paintings at the Ambleside Flower Show. ‘The money wasn’t much,” he wrote to his son, “but at least people now know I can paint flowers.’

“… If Schwitters is now established as one of the 20th century greats, he is nevertheless a peculiarly difficult figure to pin down. He is hailed as the godfather of everything from Happenings and Fluxus to performance art, conceptual art and multimedia art, claimed as a central influence by artists of the stature of Robert Rauschenburg, Damien Hirst and Ed Ruscha. A big, ebullient and hugely eccentric character …. Schwitters doesn’t quite fit with any of the established currents of 20th century art. … “He was involved with many movements and groups, but he was always slightly out on a limb,” says Karin Orchard, curator of Hannover’s Sprengel Museum, which houses the largest collection of Schwitter’s work …..

“Born in1887 into a well-off middle-class family, Schwitters’ first works were painfully conventional. He studied at the esteemed Dresden Academy alongside George Grosz and Otto Dix …. It took the First World War, in which he served as a draftsman, to break him out of his narrow, cosy, provincial shell.

“‘Things were in terrible turmoil,’ he later wrote. ‘What I had learnt at the academy was of no use. Everything had broken down and new things had to be made out of the fragments.’

“As if to make up for lost time, Schwitters, who was already 30, went through every extant Modernist style – Post-Impressionism, Cubism, Futurism, Expressionism – in the course of a year… His attempts to join [Berlin’s] Dadaist group were rebuffed ….

“Schwitters responded by starting his own movement, a movement of one he called Merz, from a fragment of the stationery of the Commerz Bank that appears in one of his early collages ….

“Collage had been pioneered by Picasso and his fellow cubists early in the century, but Schwitters’s approach was more all-embracing than anything that had gone before. For him there was no substance that was off limits to art. His wife recalled having to wait for him in the street one night as he began to create a collage from cigarette ends and other detritus….

“Schwitters’s work featured prominently in the Nazis’ anti-Modernist ‘Degenerate Art’ show. The best-known photograph of the exhibition shows Hitler laughing at one of Schwitters’s works. 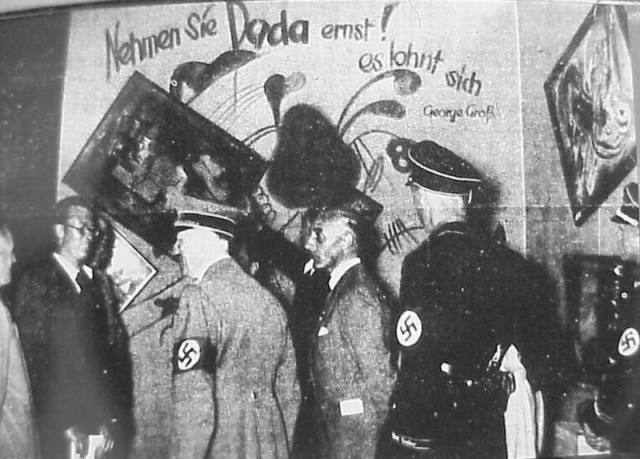 “Wanted for an ‘interview’ with the Gestapo, Schwitters fled to Norway where he had a holiday home, in 1937. On the country’s annexation by Germany in 1940, he took the last boat out, arriving in Scotland, carrying little luggage, but with a white mouse in each pocket. Interned as an enemy alien, he eventually found himself in the Hutchinson Camp on the Isle of Man. Crowded into three fenced-off streets of boarding houses in the Manx capital Douglas, the camp’s inmates included 32 university professors, various eminent musicians and the chess correspondent of the New Statesman….

“Schwitters engaged in furious nightly barked conversations with another internee, an elderly Viennese businessman. While the latter had a deep mastiff-like bark, Schwitters’s woof, one observer recalled, was higher-pitched, like a dachshund’s – all of which seems to have been accepted as a part of the rich tapestry of camp life.

“When Schwitters was released after 18 months, his long-anticipated move to London was an anticlimax …. but at his lodgings in Barnes, west London, he met the love of the latter part of his life, Edith Thomas… He called her Wantee, because she was always offering tea.

“In spring 1945, the couple moved to the Lake District, which Schwitters had been told resembled his beloved Norway … and despite the scepticism of the locals, he and Wantee made firm friendships …  Schwitters died from a heart attack in January 1948, aged 60, the day after receiving documents confirming his naturalisation as a British citizen…

“Schwitters was the subject of major exhibitions in America within years of his death, and his reputation revived steadily in Germany from the mid-Fifties onwards. But despite the enthusiasm of British artists, notably Richard Hamilton, … Britain seems to have been the last place to acknowledge Schwitters’s importance. And nowhere in Britain seems to have been more indifferent to the artist than his adopted home, the Lake District.

“When Mary Burkett became director of Kendal’s Abbot Hall Gallery in the late Fifties, she was astonished to learn of Schwitters’s association with the area. No one, it seems, had any recollection of the German artist who had lived in Ambleside only a decade before. When she finally discovered the whereabouts of the Merz Barn [at Elterwater], and went back to confront those who denied knowledge of Schwitters, they were dumbfounded. ‘I thought you meant an artist,’ said one. ‘Not a madman.'”

I'm a printmaker based in the North West of England, living in Bolton and printing at Hot Bed Press in Salford. Please visit my website johnpindararts.weebly.com
View all posts by notes to the milkman →
This entry was posted in Art, Art Gallery, Artists, Collage, exhibition, Painting and tagged art, artist, collage, kurt schwitters, lake district, merz, schwitters, Tate Britain. Bookmark the permalink.