Anish Kapoor’s Orbit – A New Eiffel Tower or A Huge Waste of Money?

I must declare at the outset that I’ve always been a great fan of public art. Streets of shops and offices are, frankly, boring. Very rarely does a shop window stop me and make me think. Some buildings I like just as works of art – the MI6 building at Vauxhall for example. 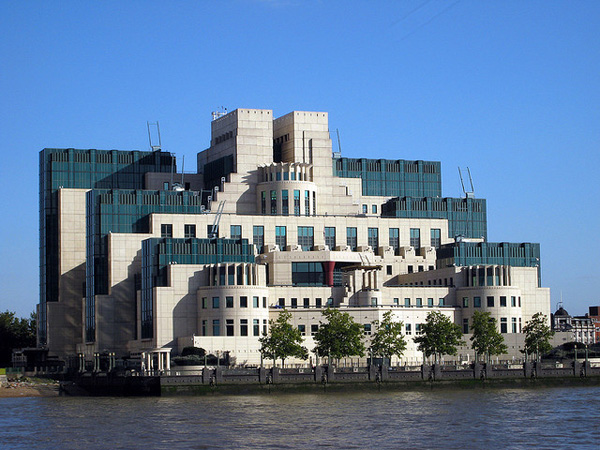 But stick an intriguing piece of art in that street and I am drawn to it, asking the same questions that I would ask in a gallery. What does it say to me? What is the artist trying to say? Are they the same thing? and so on.

I’ve been trying to follow the debate about public sculpture which has been prompted by Anish Kapoor’s “Orbit”, or to give it its correct title the “ArcelorMittal Orbit” as it has been built at the Olympic Park in largely through the generosity of Lakshmi Mittal, the steel magnate and Britain’s richest man who supplied the 1,400 tons of metal for the tower as part of his £19 million contribution to the project.

The reaction to the sculpture can be summarised by the Matt cartoon in last Sunday’s (13th May) Sunday Telegraph:

The Telegraph, which is, I admit, a little to the right of centre and is referred to by a Grauniad-reading friend as the Torygraph, had an online poll. A quarter liked it, half hated it and a quarter didn’t care (and the poll size my daughter will be pleased to learn was just over 6000).

Patrick Sawer said “Opinion is split however, as to its artistic merits.
While some critics have predicted it will achieve status to rank alongside the Statue of Liberty and the Eiffel Tower, public reaction has been more dismissive, likening it to a pile of scrap metal, a jumble of spaghetti and of course, a helter skelter.”

Jonathan Jones in his excellent Guardian “On Art” Blog referred to other public sculptures such as Rodin’s Burghers of Calais, Michelangelo’s David, and even the mermaid in Copenhagen harbour. He then went on “Anish Kapoor and Cecil Balmond’s Orbit is a daring, imaginative and exhilarating work of art. It does not deserve to be pilloried – on the contrary, if all British public art were like this, it would be an age of glory…. The real problem with commissioning good public art is that the best art is often contentious – even David was stoned in 1504 – and public commissioning bodies seek consensus…. The message here is that good art often annoys, and great art sometimes annoys greatly…. What we need are works that challenge, provoke, and make it new.”

Richard Dorment in the Daily Telegraph tried to extend the debate with an Open Letter to newly-elected Mayor of London Boris Johnson in which he asked “that you give our city back to the people who love it by taking steps to stop the desecration of its public spaces… Walk from Marble Arch down Park Lane to Berkeley Square and every few hundred yards you will find yourself recoiling in horror. The route has been lined with works of sculpture that have no aesthetic merit whatsoever…. Excrescences like Jelly Baby Family and Vroom Vroom degrade the quality of life as surely as the litter in Leicester Square that blows up to hit you in the face.” 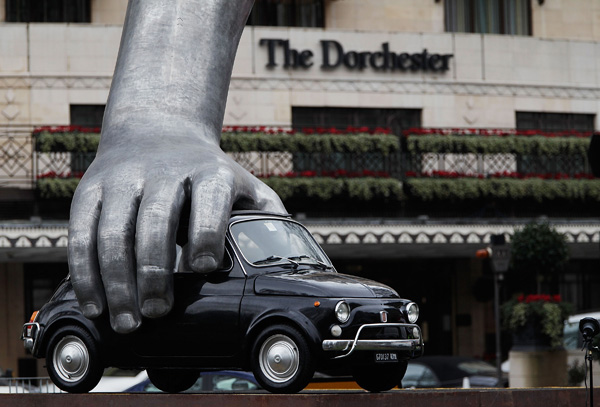 Lorenzo Quinn’s monumental sculpture Vroom Vroom is a vintage Fiat 500, the first car that the sculptor had, handled by a child’s hand. Quinn expressed the meaning of this work: “Vroom Vroom symbolizes part of my independence, my freedom and my personal growth. This was the first car I bought with the money I made in my first jobs.  I bought it with my own efforts. I didn’t depend on my parents any more. I was an adult”

As I said at the beginning, I am a great lover of public art. When I travel over to France and drive down the motorway from Calais to Boulogne, I enjoy seeing the sports sculptures on each bridge – fishermen, sailors, footballers. Also as you drive past each town, there is a sign by the motorway with an illustration about the town – the one by Calais, for example shows some Calais lace. How much better and more alive than the boring motorways of the UK.

2 Responses to Anish Kapoor’s Orbit – A New Eiffel Tower or A Huge Waste of Money?